A few weeks ago, Spectradyne exhibited at PepTalk 2019 in San Diego CA. The conference was notable for the high quality of the presentations and the deep scientific knowledge of the researchers - as a result, we had many informative conversations at Spectradyne's booth (which we think looked quite sharp, see image!).

A common theme throughout these conversations was the need for better, more efficient detection of protein aggregation. A few years ago, when we brought up Spectradyne's ability to measure submicron protein aggregates, we were often asked, "Why would we want to do that?". The discussion in these cases centered around the fact that the FDA and USP had no clear requirements on nanoscale particle measurements.

Since then, due to our efforts and those of others in the industry, the importance of nanoscale measurements for detecting protein instabilities earlier is more widely accepted. (Plus, of course, people are more aware of FDA guidance on nanomaterials.)

At PepTalk, there were multiple occasions where scientists told us that the ability to detect smaller aggregates would save them time. In these cases we didn't really even have to explain the benefits of detecting aggregates earlier with our nCS1 instrument! These scientists already understood that all micron-sized particles were once submicron particles, so why waste time waiting for big particles to form, if you can detect them earlier when they're smaller?

Increasingly, biopharma companies know that it is a competitive advantage to be more efficient in sorting winning from losing formulations. This means earlier detection of protein aggregation is good for business, regardless of a lack of hard regulations on nanoscale aggregates. The fact that Spectradyne's nCS1 instrument only requires 3 microliters of sample to make a measurement makes this process even more efficient.

So, PepTalk was great for Spectradyne in that we saw broader acceptance of the benefits of detecting protein aggregates at the submicron scale. However, for an instrumentation company like us, that's only halfway to our goal.

The other half is demonstrating that our technology is the best way to achieve those beneficial nanoscale measurements. There are, of course, other methods of detecting nano-aggregates. Most of these utilize light scattering and suffer severe sensitivity limitations in detecting submicron biological particles, which tend to be relatively transparent. More insidious, the variable detection limits of these techniques are not always obvious to a non-expert, so incorrect conclusions about particle concentration levels can easily be reached. This is a big topic, though, so we'll reserve it for another blog post. 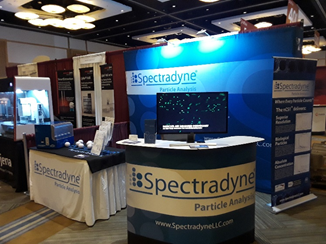