These two techniques are described in more detail below.

Spectradyne's nCS1TM employs microfluidic resistive pulse sensing using disposable microfluidic cartridges. By using state-of-the art microfluidic fabrication technology, we have shrunk the critical particle sensing constriction used in traditional RPS by a factor of 100 or so, from a few tens of microns in diameter to a few hundred nanometers. This allows us to detect much smaller particles using MRPS than is possible using RPS. A schematic of a microfluidic cartridge is shown below. The microfluidic cartridges include a 3 μL reservoir for the analyte, on-board filters, ports for voltage-biasing the analyte, a sense electrode, a fluid resistor and the critical MRPS aperture or nanoconstriction, through which particles flow one at a time. The analyte, which could be blood serum, diluted or full-strength phosphate-buffered saline, or any conducting fluid, is electrically biased by the voltage-bias electrodes, causing an electrical current to flow through the analyte, the fluidic resistor and the aperture. When a particle suspended in analyte flows through the aperture, it changes the electrical resistance of the constriction by occluding part of the current, by an amount proportional to the ratio of the nanoparticle volume to that of the aperture, just as in RPS. Individual particles thus give changes in the sense voltage proportional to their volume, allowing them to be counted and sized. The much smaller apertures available in Spectradyne's microfluidic cartridges allow much smaller particles to be detected.

The disposable MRPS cartridge includes ports for voltage bias Va and Vb, a microfluidic nanoconstriction or aperture Ra and a fluidic resistor Rb, The voltage bias causes a current I to flow, setting the voltage Vout of the sense electrode. Particles flowing through the aperture change the aperture resistance in time (top right), thereby causing measurable changes in the sense voltage Vout. These changes are proportional to particle volume, so each particle's volume is measured individually.

You can read more about microfluidic resistive pulse sensing elsewhere on our website: 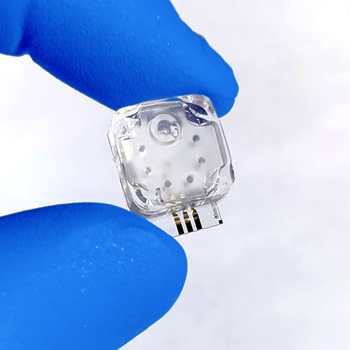 A microfluidic cartridge at the heart of Spectradyne's MRPS technology. 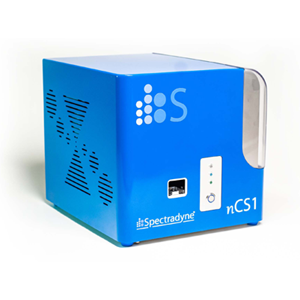 These data form the basic output for a particle size analysis performed by RPS: Particle concentration versus particle size. As each particle is sensed individually, there are no assumptions about how the signal that is detected is related to the number or size of each particle: The measurements are direct. RPS instruments are benchtop instruments, and sample preparation is minimal. The size range of particles that can be analyzed using RPS depends on the size of the aperture and the sensitivity of the electronics used to detect the particles; typically the dynamic range (in terms of particle diameter) is from about 1 μm up to 100 μm. In standard RPS, the two volumes containing the fluid, and the aperture that connects them, is a permanent part of the instrument, and is not normally disposable; this thus allows for some sample cross-contamination. However, in microfluidic RPS (MPRPS), which we discuss below, this central particle analysis part of the instrument is replaced by a disposable microfluidic cartridge, eliminating this potential source of error.

Particles in fluid pass through a constriction (NC) as shown on left side of the drawing above. A voltage is applied continuously across the two sides of the NC. As particles pass through the NC, the output signal changes in proportion to the volume of the particle. Particles are measured individually, with no dependence on particle material.